A new kind of games company 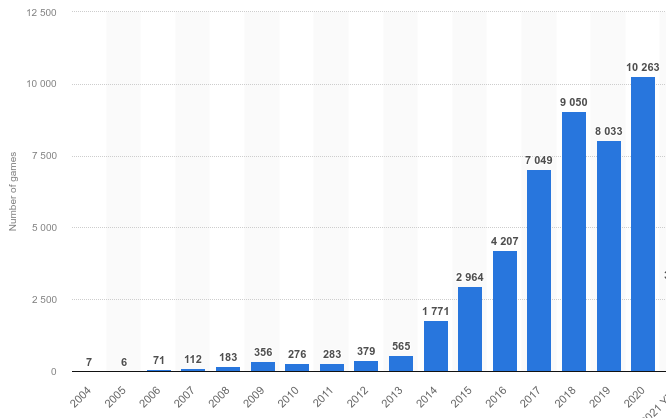 Ten thousand games were released on Steam in 2020. That's about 27 new games released per day, and that's only one platform. There are consoles like Nintendo Switch, Playstation, and a multitude of other smaller platforms like Itch and Gog. But even these platforms are eclipsed by the hundreds of games released every day on Google Play and the App Store.

If you dream of making games this sucks. You pour your heart and soul into your game for months and months. Then you finally release and hundreds of other games come out on the exact same day. Hundreds of shiny new games by triple-A pros totally eclipsing your fragile indie creation. How's a humble indie dev supposed to compete?

There's a more optimistic way to look at it. Video games are a multi-billion dollar industry. There's yuuuge demand for fresh games all the time. If you can just find one tiny, tasty, sustainable slice of this big delicious pie you can do well enough to pay the rent. You can refuse to compete and niche down instead. Go make that multiplayer rhythm roguelike for SNES you've always dreamed of.

Making a game is an epically difficult undertaking. In most fields you become an expert in one thing and then go hard at it. But if you want to make a game solo, you have to master math, logic, fine art, animation, music composition, world building, 3d, sound design, narrative, cinematics, game design, and the je-ne-sais-quois they call "game feel".

Epically difficult? Yes. Impossible? No. Every day solo devs and small teams climb this mountain and release beautiful, remarkable, astonishing games. Glorious experiences that open the mind and warm the heart. They can only do it because they love the craft. If you love the craft and you're willing to work hard then you might just be able to do it too.

Cool, so you've knuckled down and made your game. The last bug is fixed, the build has compiled, and it's in the store all tied up with a ribbon. That's when things get really hard. It's the dreaded word every indie developer hates. "Marketing." That's the thing you do once you've done all the fun stuff and shipped your game right?

Wrong. Marketing doesn't work that way. Marketing simply means telling people about what you are building. You can't just do it one time right at the end. How many people will read your one pathetic launch tweet? Nobody. Not enough to pay the rent anyway.

You need lots and lots of people to find out about your game. You need people to be finding out about it every day you're working on it and for a good while after. You have to be consistent and comitted to producing content about your game over and over in different channels, without spamming people. Then your game is done and shipped and it's time to start over from scratch. Marketing is hard work.

And that brings me to our glimmer of hope.

Here at The Punk Collective we think we have a solution to this grind. A way to make game dev fun again with a totally new development model. What's more, we think other people can do this too. We think you can do this. Yes you, with The Ultimate Game Idea brewing in your head.

Our idea is simple really. There are four of us, and we each make a small game at the same time, in parallel. Our collective releases one three-to-five buck game per month. That's it, that's the whole idea.

If you do the math you will quickly see that this gives each of us four months to finish our individual games. More importantly, it gives you one fresh and juicy game every single month for a very affordable price. Sounds like a win-win situation to me.

Four months is a good chunk of dev time for a game at this price. You can definitely make a small high quality game in three to four months. It's a nice sustainable pace to build at. We have families and jobs, and this is a side hustle. So we get to work on these awesome games and you, the people, get a shiny new game every month. Everybody wins.

This model solves so many problems for indie devs because the games are the marketing. Making games becomes a compounding effort. Every game we make is a valuable addition to our collective library. We can do bundles. We can make enhanced versions. Each of us gets to build on the marketing work of the others. Every person who follows us has the chance to see our next great game.

Our quest has actually begun already. We've been doing this for a few months now and our first game is out. BLaTTiX is a fast-paced retro 2.5D dual-stick arena shooter with a punk rock soundtrack where everything is made of vectorballs. Go buy it. It's awesome.

And we have another game coming in a few days. And another two games coming in the weeks after that. We're on a roll. (BTW you can see all the games we're making right now on our itch page).

The important thing is we are having fun, and fun is sustainable. We four meet up regularly and hack on our games together. The pressure is on but it's a fun kind of pressure. It's an epic game dev adventure.

Of course, we're not sure if this is going to work out. It's an experiment and nobody knows what the outcome will be. We will all get to find out though. We'll see if this experiment works or if it all goes haywire and we crash and burn. It's game dev mad science.

And you will get to find out too. You get to watch us flail or nail it. If you want to find out what happens come along for the journey. You can follow along and support us on our game dev quest:

And of course you can also support us by buying our first game, BLaTTiX. Thanks so much for reading and we hope to see you soon!

Jason, Jack, Brad, and Chris.
AKA The Punk Collective.

PS Our next game comes out next week. You can pre-order it here: